If You LoveFilm, You’ll Love Poundland! 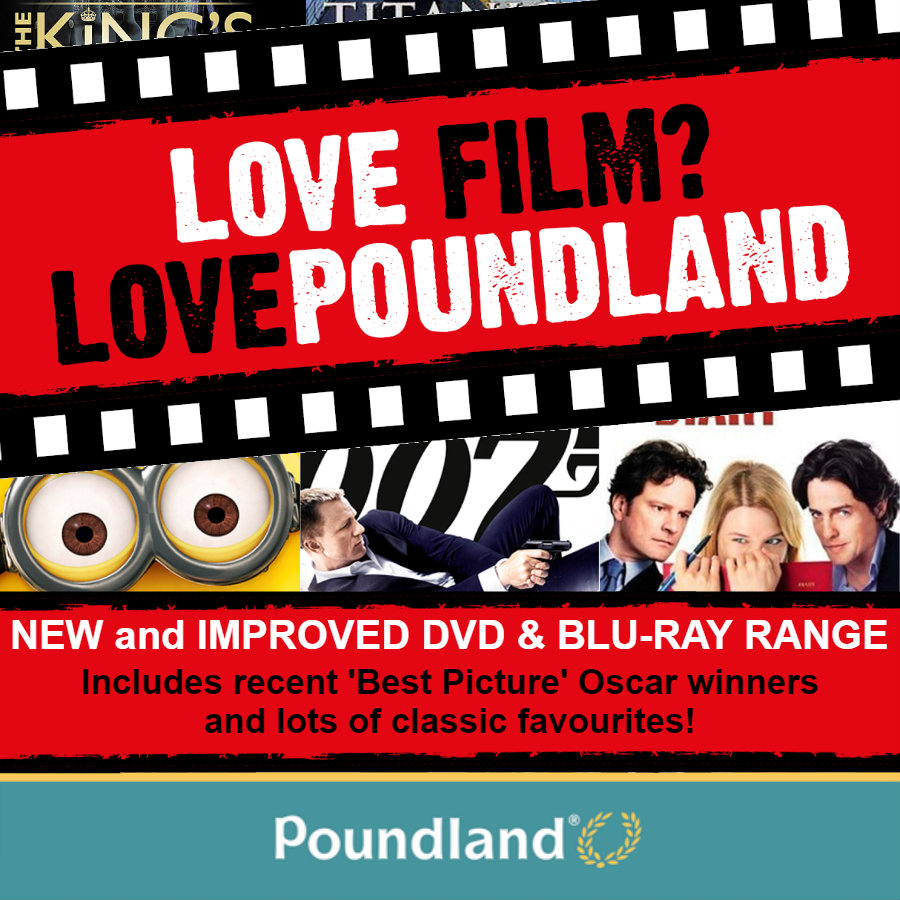 The Reviews Are in: If You LoveFilm, You’ll Love Poundland!

Poundland is now the best place on the high street to get your DVD and Blu-rays for movie nights, as Amazon gets set to axe its LoveFilm by Post service at the end of the month.

With Amazon’s LoveFilm being abandoned, Poundland has cemented its partnership with global used media giant, musicMagpie. The deal aims to fill the gap for film lovers across the UK who still prefer to watch their favourite movies on a physical format.

LoveFilm, which at its height in 2011 had 1.4 million subscribers, will close at the end of October, leaving those who love to watch physical DVD’s with fewer options.

The range includes thousands of top class films, all of which are in the top 1% of best-selling titles sold on Amazon UK, including 17 of the last 20 ‘Best Picture’ winners at the Oscars and much-loved favourites like Skyfall, Shawshank Redemption, Bridget Jones and Despicable Me, all available for just £1, offering unbeatable value.

The musicMagpie deal will also see a fantastic range of £1 Blu-rays on shelves for the first time, so Poundland shoppers can enjoy the same HD experience that’s only available at a premium on most subscription services.

Poundland MD, Barry Williams said, “If you love film, we want you to love Poundland.  We know our customers love to pick up a DVD or BluRay for £1 in our stores and by widening the quantity and quality of the fantastic musicMagpie Replay range we are well and truly filling the gap left by those who think everyone wants to stream movies.”

Liam Howley, Marketing Director at musicMagpie.co.uk said, “The death of the physical DVD has been much exaggerated as the majority of people still love to watch them, especially when available at such an enticing price point.

“Sales at Poundland of the Replay collection have doubled since introducing our much-expanded range, with every store benefiting from a constantly refreshed selection of titles, so there is always something new for Poundland’s loyal and regular customers.”

Since announcing its plans to kill off LoveFilm by post, Amazon has faced criticism online from subscribers – especially from rural and ‘notspot’ customers whose low broadband speeds prevent them from streaming movies.

Later this month, the discount retailer will introduce ‘Love Film? Love Poundland’ signage in store to remind customers left behind by Amazon that they can continue their love of physical DVDs & Blu-rays at Poundland.

*Netflix standard subscription of £7.99 as per Friday 20th October.

musicMagpie is a UK business based in Stockport at the forefront of the global recommerce revolution.

www.musicMagpie.co.uk is the most popular recommerce website in Europe and enables customers to get cash easily, and all in one place, for a whole host of their unwanted stuff such as CDs, DVDs, games, mobile phones, books and tech items such as old mobile phones.

The company’s website and mobile Apps mean that anyone can easily sell their unwanted products and reap the benefits – from making a little extra cash and freeing up valuable space in the home, to reducing the need for borrowing and minimising their impact on the environment.

What’s more, since it was established in 2007, musicMagpie has pushed over £140m of debt-free capital back into the economy, putting extra cash into the hands of consumers and fuelling further spending.

www.musicMagpie.co.uk gives customers an instant reward value for their unwanted stuff using a smart valuation engine named ‘ALIVE’ and it pays out via cheque, bank transfer, PayPal or consumers can choose to donate their cash to charity.

The fast, easy and hassle-free service has a Trust Pilot score of 9.2 and now has over 4m registered users who have either now sold or bought from the business via its website or App, both of which now have the ‘shop’ and ‘sell’ functions on it, and both of which operate under the mantra ‘Why wouldn’t you?’. It is the world’s biggest seller on both Amazon and eBay in any product category and was recently recognised as the first global seller to ever hit 5m feedbacks on eBay.