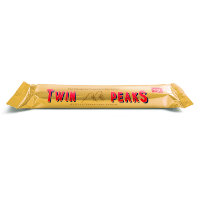 Poundland today announced it had partnered with a Birmingham chocolatier to launch a new, own brand chocolate bar called “Twin Peaks”.

The double mountain bar, created in the home of British chocolate by specialist Walkers Chocolates, has a distinctive British flavour compared to more traditional milk nougat bars from Switzerland.

Inspired by the double hill on the top of the local Wrekin Hill in Shropshire, it will be available at Poundland’s famous £1 price point in all stores the first week of July.

Poundland believes Twin Peaks will offer a true taste sensation to competitors, and has already received rave reviews in secret blind taste tests where two in three customers preferred it to the branded alternative.

Development on Twin Peaks began earlier this year after the makers of Toblerone – Poundland’s top-selling item – created uproar by reducing the weight of the bar by 20g and changing the shape of its iconic brand.

Twin Peaks – at 180g – is 20 per cent heavier than its branded equivalent, and offers a double mountain in every packet.

Twin Peaks is manufactured in the West Midlands – for centuries the home of British chocolate-making and the home of Poundland since 1990. With millions set to hit Poundland’s stores over the coming weeks, Twin Peaks will help support UK chocolate manufacturing.

Poundland trading director Barry Williams said of Twin Peaks: “Poundland shoppers are savvy and the change in their favourite chocolate bar last Christmas didn’t go unnoticed. That’s why we’ve created a new £1 alternative for them – the size they wanted, with a British taste, and with all the spaces in the right places.”

A sneak peek of the Twin Peaks chocolate bar can be seen on the Poundland documentary Trouble in Poundland airing on Tuesday 20th June at 9pm on ITV.